Uskudar is like the “ugly girl” of Istanbul edd

People will use trains if there is a reliable, user-friendly service Susie Johnston

Although forwarder companies and wagon owners has an important share in railway transportation, the biggest customers of TCDD are the manufacturers organizing their transports by rail directly with TCDD.

Most of them has direct railway connections to site, most of them were once (some still are) government owned companies. These companies have almost the half share of the total volume.

Here’s the first 10 giants that are in the “100 leading customers of TCDD” list: 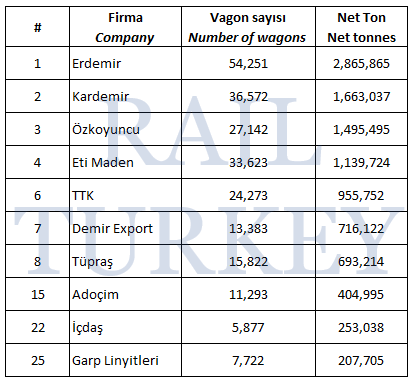 TCDD’s biggest customer, Erdemir, had loaded almost 3 million ton in 2012. This amount is more than 10% of all railway loads. Erdemir has mines of iron ore in Divrigi and Hekimhan, and organizing transports from these mines to steel plant in Iskenderun. Erdemir was once a public company, and now owned by Oyak Group after privatization.

Second in the list is Kardemir, another steel company. Kardemir is organizing iron ore and coal transportations by rail. Total volume by rail was 1,7 million ton in 2012. Kardemir was another public company, and now owned by local organizations, union and companies.

The third biggest customer both in this category and in the main list is Ozkoyuncu. Headoffice is at Kayseri, and main loads are iron ore and magnetite. 2012 volume was 1.5 million ton.

The public company responsible for operating all boron mines in Turkey, Eti Maden, is 4 in list with more than 1 million ton in 2012.

Demir Export, operating iron, chrome and cupper mines is 6th with 700k to.

The biggest industrial enterprise of Turkey, Tupras, is transporting huge volumes of fuel. Having enlarged its railcar fleet with the last order of 100 new tank wagons this year, Tupras transported about 700k to last year.

The biggest client of TCDD in cement sector, Adocim, has transported 400k to last year.

Icdas, has its own railcar fleet as Tupras. With the 176 Ea freight wagons, Icdas carried 250k to last year.

The 10th company in this category is another public company. Garp Linyitleri Isletmesi, operating Tuncbilek brown coal mine, had transported 200k to in 2012.