Turkey has a target of being railway hub in the region connecting east to west, north to south.

Despite these efforts, the transit traffic on rail through Turkey is almost negligible. In 2013, 21k to of transit freight was transported on rail. To compare, only the transit container traffic via Kazakhstan is 1.1mn in 2012. 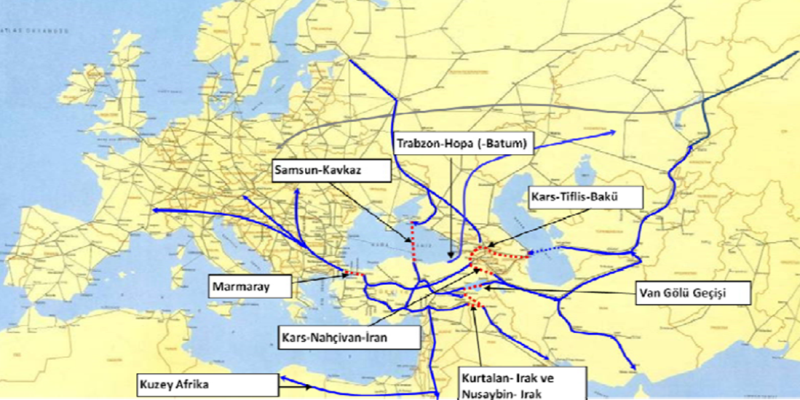 Russia has proceeded a lot in this route. Kazakhstan is the second strongest alternative. 15 days from China to Europe is already achieved. Both countries are not only investing in infrastructure, but also improving the organization and capabilities. Strong terminals in Europe at the borders where two different railway gauges exist is the other advantage of this route.

Connection from China to Europe via Turkey via Iran is slow, unreliable and expensive due to many border crossings and insufficient service on way.

Turkey, geographically, is the best alternative. There’s no other alternative by rail. And other transport modes (sea, truck) are not reliable. Especially the loosen of santions to Iran may increase the volume in this route.

On the other hand, railway connection to Syria and Iraq is closed now due to war in Syria. Rail connection to Iran is not reliable, where delays upto 15 days may be faced. The absence of a regular container traffic between Iran and Turkey is the main problem.

Russia and Kazakhstan already have strong connections to Europe from north. Others such as Turkmenistan, Uzbekistan, Kyrgyzstan may also use this connections. These connections have already neutralized Europe’s efforts to connect Caspian area to Europe via Black Sea and Turkey.

The success of Baku-Tbilisi-Kars railway to get a share from this traffic highly depends on the existence of a regular and fast container traffic between Baku and Istanbul. The transit time from Kars to European side of Istanbul for a container block train must decrease down to 3-4 days to compete with the northern alternatives.

This is maybe the biggest potential for Turkey. Almost none of the CIS countries have strong port connections opening to world. Iran is trying to connect northern countries to its ports, and recently opened Kazakhstan-Turkmenistan-Iran railway connection is an important attemp for this. However Iran ports have very weak connections to Europe.

On the other hand, Turkish ports have very frequent container services to Europe and provide a wide range of alternatives in Mediterranean, Aegean and Marmara seas. The railway connections of ports will be very important to get share from this traffic, where a few is ready to provide efficient railway service (see Railway Connected Ports of Turkey)