Trailer trains: Trendy but not so easy

In 2008, when the first trailer train departs from Trieste with Turkish semi trailers, only a few were aware of the big change coming.

Trailer trains have developed very fast in last 8 years. Today, 52 trains which can carry semi trailers depart every week from Trieste to several destinations in Europe. Every week 1500 semi trailers and containers are transported in each direction.

The effects of trailer trains in the Turkey-Europe transport market are so deeply that, traditional overland companies fall back in the top list where companies using trailer trains step forward. According to the list published by General Directorate of Highways, the number of shipments of Ekol and Mars, which are widely using trailer trains, has passed the sum of other eight companies in the list. 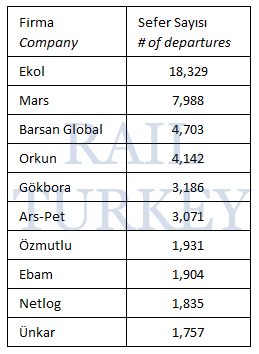 First regular train was done by Ulusoy Logistics in June 2014. This service had stopped after almost two years. Ulusoy Logistics was carrying its own semi trailers and was able to reach to Germany in 4 days.

Another attempt was by Mars, which is already organizing trailer trains from Trieste. Timing was not good. Train had suffered from illegal Syrian immigrants problem and stopped.

Rail Cargo had also started using pocket wagons in its container trains. A few trailers were transported, but the service has not become regular.

EU is introducing new terms and incentives every day to be able to shift loads from trucks to trains. Target is to increase share of rail by 30%. A good example is Gotthard Tunnel, which is constructed suitable for trailer trains. It would be not surprising to see more trailer trains in following years.

This site uses Akismet to reduce spam. Learn how your comment data is processed.