There are a number of railway companies focused in domestic and regional railway transports in Turkey, and their share in railway market is not negligible. 20% of the total railway loads (almost 5 million to in 2012) is organized by these companies.

These companies are generally the family companies settled in one or two regions, giving all needed services in that area,  having a small number of staff, with no railcars, but have some investment for handling and/or storage. They mainly organize domestic railway transports from those regions, but also exports in eastbound as well (nowadays only towards Iran since all others are disconnected). Although working in a limited area, their volumes are high enough to be considered.

Here are the top 10 of railway forwarders in domestic and regional transports based on the list of top 100 customers of TCDD in 2012: 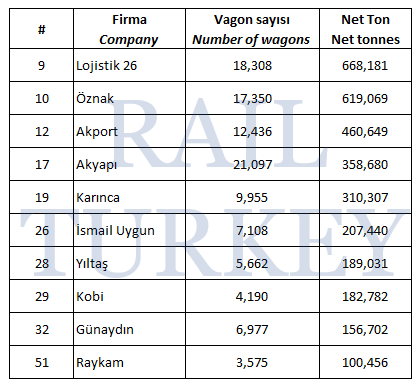 Lojistik26, settled in Eskisehir and Mersin Yenice is the number one of this category. It’s coming just after the big producers in TCDD’s Top 100 list. Organizing domestic transports as well as the exports to Iran. Carried 700,000 to in 2012.

Oznak is a company with headquarter in Izmir, and offices in Manisa and Iskenderun. Organizing domestic transports and exports to Iran as well. Carried more than 600,000 to in 2012.

Akyapi, settled in Bogazkopru (where a logistic village under construction), next to the industrial region in Kayseri, is organizing mainly container trains between Kayseri and Mersin. Carried 350,000 to in 2012, and is the leader of this category in terms of wagon numbers.

Karinca, settled in Mersin, has a share in high volume of mining transportation in region. Carried 300,000 to in 2012.

Raykam, settled in Gebze, is organizing both domestic transports and exports to Iran and CIS countries. Carried 100,000 to last year.