Last train to Ankara Station on 10th of July

The railway section going through Ankara will be closed for 18 months due to Baskentray Project.

Due to engineering works for rail bridges on Halkali-Cerkezkoy-Corlu railway, Halkali is getting prepared for another closure. 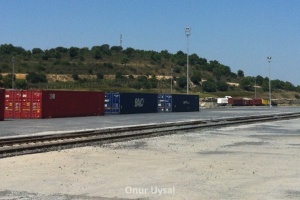 Will Halkali be closed again?

Halkalı Terminal may again be closed to rail traffic due to problems in bridges.

Closure of Sincan-Kayas under discussion

Closure of Sincan-Kayas railway section passing through Ankara for 2 years is under discussion.

Samsun-Kalin railway will be closed soon due to renewal and signalization works.

Railway blockages and restrictions on TCDD network as of June 2015..

by Erkan Özkan
Halkali Terminal, which has been kept closed for almost 2 years is waiting for the completion of Halkali-Cerkezkoy railway..

by Erkan Ozkan
Railway closure between Palu-Genc which stopped Iran railway traffic opened at the beginning of this month..

After closure of international rail transports to Syria and Iraq, the transhipment terminal Nusaybin at border had to be closed to railway traffic.

Halkali opening may be postponed

The opening of Halkali Terminal, which has been closed for more than 1 year may be postponed..

No trains to Samsun for 2 years

Construction works will start on railway connecting Samsun to national rail network in 2015..

After a long closure, the Kosekoy-Bozuyuk line connecting Europe to Asia is opened.

Luckily, and unfortunately, railway infrastructure in Balkan region is almost totally under construction. Here are the ongoing or about to start construction works in Balkan countries: