The legal problems which stopped Baskentray project since 2012 has been solved.

Target date for commission is announced as 1st quarter of 2017 in Kocaeli Tram Project.

Hyundai Rotem remains the only company in the tender for 300 metro cars of Kabatas-Mecidiyekoy-Mahmutbey Metro line under construction. 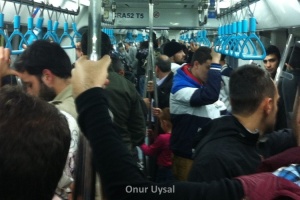 The ridership in Marmaray hits another record in December 2015, and reached 6 mn passengers.

Ridership on rail over 600 mn in Istanbul

Ridership in metro, tram and cable car in Istanbul increases by 17% in 2015, compared with previous year.

Tender will soon open for the extension of Izmit Tram currently under construction and new Gebze-Darica ligh rail system.

Metro cars at Izmir in October

First 5 of 19 metro sets to be used in Izmir Metro will be delivered in October.

You just arrived Istanbul. And you would like to see city using public transport, avoiding taxis and traffic jam if possible.