Kick off ceremony for Izmit tram

Kick off ceremony will be held at 14:00 today for Izmit Tram (Akcaray) at depot area next to Izmit Bus Terminal.

The contract for 12 tram cars of Kocaeli Tram, Akcaray, is going to be inked on 5th of October.

Hyundai Rotem is awarded for the 18-tram-set tender of Antalya. 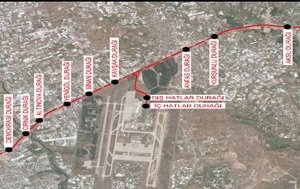 Preliminary analysis will soon start for a new tram line in Antalya.

Livery and internal design of Karsiyaka-Konak trams which are under construction in Izmir are determined. Blue and turquaz will be the main colors in new design.

Construction works completed and tests started in the new tram line in Konya between Alaaddin and Adliye.

The capital of Turkey, Ankara, has 3 different rail systems for urban transport..

Bursa Metropolitan Municipality and Durmazlar signed the contract for 60 LRVs and 12 trams.